“The faithful are born anew by Baptism, strengthened by the sacrament of Confirmation, and receive in the Eucharist the food of Eternal Life.” (CCC, 1212).

The Sacraments of Healing

“The Lord Jesus Christ, physician of our souls and bodies, who forgave the sins of the paralytic and restored him to bodily health, has willed that his Church continue, in the power of the Holy Spirit, his work of healing and salvation, even among her own members. This is the purpose of the two sacraments of healing: the sacrament of Penance and the sacrament of Anointing of the Sick” (CCC, 1421).

The Sacraments at the Service of Communion

“…Holy Orders and Matrimony, are directed towards the salvation of others; if they contribute as well to personal salvation, it is through service to others that they do so. They confer a particular mission in the Church and serve to build up the People of God.” (CCC, 1534).

If you have questions, please contact the Parish Office.

Matthew 28:19-20 “Then Jesus approached and said to them, ‘All power in heaven and on earth has been given to me. Go, therefore, and make disciples of all nations, baptizing them in the name of the Father, and of the Son and of the Holy Spirit, teaching them to observe all that I have commanded you. And behold, I am with you always, until the end of the age.’”

To request a copy of your baptismal record, click here. 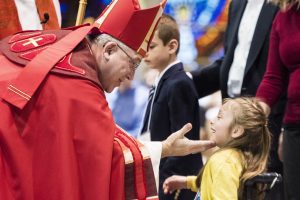 John 20:20-22 “…The disciples rejoiced when they saw the Lord. Jesus said to them again, ‘Peace be with you. As the Father has sent me, so I send you.’ And when he had said this, he breathed on them and said to them, ‘Receive the Holy Spirit.’”

Click here for more information about Sacramental Preparation for children

Click here for more information about becoming entering into the Catholic Church as an adult.

For more information on the Sacrament of Confirmation, see the Catechism, paragraphs 1285-1321.

Matthew 26:26-28 “While they were eating, Jesus took break said the blessing, broke it, and giving it to his disciples said, ‘Take and eat; this is my body.’ Then he took a cup, gave thanks, and gave it to them, saying, ‘Drink from it all of you, for this is my blood of the covenant, which will be shed on behalf of many for the forgiveness of sins.’”

John 13:12-15 “So when Jesus had washed their feet and put his garments back on and reclined at table again, he said to them, ‘Do you realize what I have done for you? You call me teacher and master and rightly so, for indeed I am. If I, therefore, the master and teacher, have washed your feet, you ought to wash one another’s feet. I have given you a model to follow, so that as I have done for you, you should also do.’”

Celebrate Mass with us! 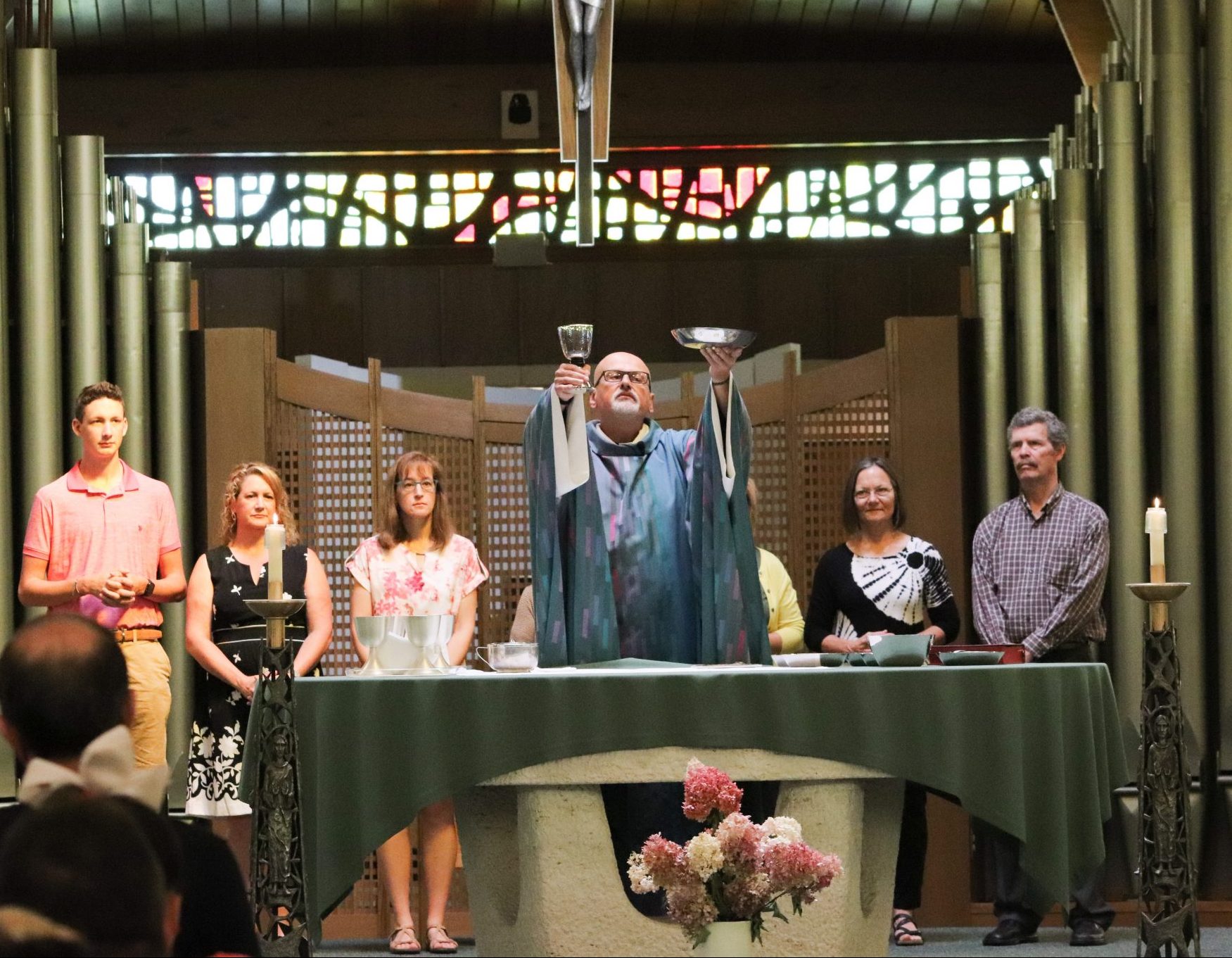 For information about preparing to receive the Sacrament of Eucharist for the first time, click here.

The church building is open from 7:00am to 9:00pm daily for prayer in the sanctuary and the chapel, as well as, before the tabernacle.

Those who desire to share in the Eucharist, but who are not yet Catholic are encouraged to contact the Faith Formation Office to begin the Inquiry process.

For more information on the Eucharist, see paragraphs 1324-1419 in the Catechism of the Catholic Church.

2 Corinthians 5:18-20 “And all this is from God, who has given us the ministry of reconciliation, namely, God was reconciling the world to himself in Christ, not counting their trespasses against them and entrusting to us the message of reconciliation. So we are ambassadors for Christ, as if God were appealing through us. We implore you on behalf of Christ, be reconciled to God.”

For the liturgy schedule and reconciliation times, click here.

For information regarding First Reconciliation for children, click here.

The Catechism of the Catholic Church in paragraphs 1422-1498 has more information about the Sacrament of Reconciliation/Penance.

Anointing of the Sick

James 5:14 “Is anyone among you sick? He should summon the presbyters of the church, and they should pray over him and anoint him with oil in the name of the Lord…”

The Sacrament of Anointing of the Sick can be conferred upon anyone facing surgery, a major medical procedure, who suffers chronic illness or the day to day struggles of aging as well as those who are nearing death. Call the Parish Office to schedule.

Regularly scheduled communal Anointing of the Sick services take place throughout the year. Dates will be published in the bulletin and on the website.

The Catechism of the Catholic Church in paragraphs 1499-1532 has more information about the Sacrament of Anointing of the Sick.

Luke 8:43 “He summoned the Twelve and gave them power and authority over all demons and to cure diseases, and he sent them to proclaim the kingdom of God and to heal the sick.”

If you believe God is calling you to explore a vocation to the priesthood or religious life, contact your Parish Priest for direction and resources. Be not afraid!

See the Diocese of Saginaw vocations page for more information.

The Catechism of the Catholic Church in paragraphs 1536-1600 has more information about the Sacrament of Holy Orders.

Matthew 19:4-6 ”Jesus said in reply, ‘Have you not read from the beginning the Creator made them male and female and said, For this reason, a man shall leave his father and mother and be joined to his wife and the two shall become one flesh? So they are no longer two, but one flesh. Therefore what God has joined together, no human being must separate.’”

Contact the Parish Office at least six months in advance to check on available dates and to begin your marriage preparation.

The Catechism of the Catholic Church in paragraphs 1601-1666 has more information about the Sacrament of Matrimony.

What Pope Francis Says About the Sacraments

“Baptism permits Christ to live in us, and to live united with him,” he said, “in order to collaborate in the Church, each according to his or her own condition, to the transformation of the world.” (April 11, 2018 General Audience) 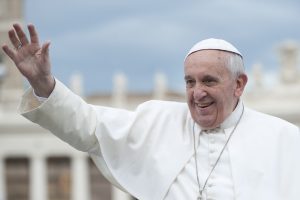 He then explained that, during confirmation, “through the sacramental sign of anointing with sacred chrism, we receive the gift of the Holy Spirit in order to be more closely conformed to Christ, God’s ‘anointed one.’”

“We are also strengthened — ‘confirmed’ — in the grace of our baptism and in our mission of bearing daily witness to Christ and his love,” the Holy Father continued, adding, “Confirmation is God’s work,” as is every sacrament.

And this particular sacrament, said the Pope, “ensures that our life be embodied in the image of his Son, for us to love like him, infusing his Holy Spirit.”

“This Spirit acts with strength within us, within all people and during one’s whole life,” he emphasized, stating that, “when we receive him in our hearts, Christ makes himself present and takes shape in our lives.” (January 29, 2014 General Audience)

“The Eucharist is Jesus who gives himself entirely to us. To nourish ourselves with him and abide in him through Holy Communion, if we do it with faith, transforms our life into a gift to God and to our brothers,” the Pope said Aug. 16. To let ourselves be nourished by the “Bread of Life,” he said, “means to be in tune with the heart of Christ, to assimilate his choices, thoughts, behaviors.” It also means that we enter into “a dynamism of sacrificial love and become persons of peace, forgiveness, reconciliation and sharing in solidarity,” he added. (August 16, 2015 Sunday Angelus Address) 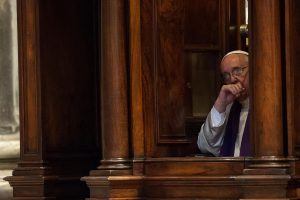 The Pope said he finds it helpful to see the Lord’s attitude as that of “a father with a son who thinks he’s big, who believes he’s grown up, but instead is really just halfway there. The Lord knows that we are all halfway there and many times we need this, to hear this word: ‘Come, don’t be frightened, come. There is forgiveness.’ And this encourages us to go to the Lord with an open heart. It is the Father who awaits us.” (Morning Mass February 27, 2018)

Anointing of the Sick

When the priest goes to the sick person, “it is Jesus who comes to bring comfort, to give strength, to give hope and help, also to forgive sins and this is very beautiful.” “Do not think this is taboo” to call the priest over, he said, “because it is always beautiful knowing that in moments of pain and sickness we are not alone.” “The priest and those who are present during the anointing of the sick, in fact, represent the whole Christian community, who, as one body with Jesus, embrace the person who is suffering and his or her family members,” providing them with strength and hope and sustaining them with their prayers and love, Pope Francis said. (February 26, 2014 General Audience) 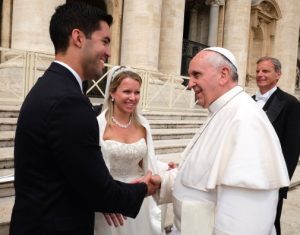 “Holy Orders, in its three grades of bishop, priest and deacon, is the Sacrament that enables a man to exercise the ministry which the Lord Jesus entrusted to the Apostles, to shepherd his flock, in the power of his Spirit and according to his Heart. Tending Jesus’ flock not by the power of human strength or by one’s own power, but by the Spirit’s and according to his Heart, the Heart of Jesus which is a heart of love. The priest, the bishop, the deacon must shepherd the Lord’s flock with love. It is useless if it is not done with love. And in this sense, the ministers who are chosen and consecrated for this service extend Jesus’ presence in time, if they do so by the power of the Holy Spirit, in God’s name and with love.” (General Audience March 26, 2014)

“Today, there are those who say that marriage is out of fashion. Is it out of fashion? In a culture of relativism and the ephemeral, many preach the importance of ‘enjoying’ the moment. They say that it is not worth making a life-long commitment, making a definitive decision, ‘forever’, because we do not know what tomorrow will bring. I ask you, instead, to be revolutionaries, I ask you to swim against the tide; yes, I am asking you to rebel against this culture that sees everything as temporary and that ultimately believes you are incapable of responsibility, that believes you are incapable of true love. I have confidence in you and I pray for you.” (Address to World Youth Day volunteers, Rio de Janeiro, Brazil, July 28th, 2013)